Art & Object |The Rise and Impact of Chicano Graphics

In the 1960s, Chicano activist artists forged a remarkable history of printmaking rooted in cultural expression and social justice movements that remains vital today. The exhibition ¡Printing the Revolution! The Rise and Impact of Chicano Graphics, 1965 to Now presents, for the first time, historical civil rights-era prints by Chicano artists alongside works by graphic artists working from the 1980s to today. It considers how artists innovatively use graphic arts to build community, engage the public around ongoing social justice concerns and wrestle with shifting notions of the term “Chicano.” Mexican Americans defiantly adopted the term Chicano in the 1960s and 1970s as a sign of a new political and cultural identity. Graphic artists played a pivotal role in projecting this revolutionary new consciousness, which affirmed the value of Mexican American culture and history and questioned injustice nationally and globally. 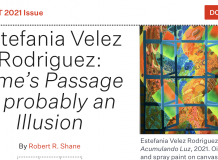