Photographers Tania Franco Klein and Lucia Fainzilber are appearing at Phillips for the first time—both with images that are not so much self-portraits as portraits of Selfhood. The two artists are intensely interdisciplinary and somewhat peripatetic (Franco Klein has lived between Mexico City, California, and London; Buenos-Aires-born Fainzilber works in New York). And their respective works, Plane (Self-portrait) and Untitled 31, reflect the simultaneous confusion, protection, and yearning of an identity-in-progress, rather than one already formed. 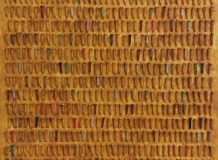