Lautaro, whose full name is Lautaro Cuttica, noted that the title of his exhibition, “The Map and the Territory,” took inspiration not from French author Michel Houllebecq’s novel of the same name, but from Louis Borges’s 1946 story “On Exactitude in Science.” The story tells the tale of a group of cartographers who decide to make a to-scale map of the world that becomes so accurate that people began to inhabit the map itself. 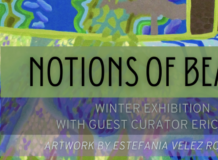