The true gardener is the constant gardener, says Robert Pogue Harrison. As spaces that demand constant tending, gardens always threaten to disappear without leaving behind any trace. In that sense they have given shape —in literature, in art, in culture in general— to the space of dreams and fantasies, inner geographies that fade away as soon as the dreamer wakes up.
In María Berrio’s latest collection, Dream Gardens, we seem to inhabit Ogygia, Calypso’s fantastic garden, an island where nature is symmetrically crafted to please the eye, where succulent fruits offer themselves to the visitors, and animals are delighted by human conversation. Ogygia is a Tropical Eden of abundance.

The distance that inevitably separates us, the spectators, from these works —gently but painfully setting us apart from its gardens— recreates an age-old topic in Western art: the expulsion from paradise. In that distance is where these canvases concentrate all their power. By examining them as a world to-be-left-behind —or a world that is yet to come— we cannot but see them as depictions of a religion whose symbols we used to recognize but have now forgotten and are in the process of remembering again. That is why the first sensation we feel in front of these symbols —huge birds, cat-like tigers, embroidered angels, all of them an uncanny system of belief —is counterintuitive: it is an entrancing nostalgia for the future, a retrospective Utopia.

In representing a religion that is not from the present, Berrio has had to draw from different gardens in order to tend hers: the Garden of Eden, the Secret Garden, the Enchanted Garden, the Midnight Garden, the Garden of Love, the Hortus Conclusus (Enclosed Garden), the Royal Garden, among others. Calypso is the monarch of her island. All gardens remind the visitor of their monarch: think about Versaille. But María Berrio is not a queen: she is an artisan, a seamstress of the imagination.

Her careful and laborious assemblage of torn pieces of paper is a way of creating a transcendental space/time where myths and dreams can be told; among them, the story of the all too human yearning to recover the treasures of the lost garden of childhood, which echoes the longing for Paradise Lost. Her new works, which are not exactly collages, can be thought of as producing symbolic surfaces that interweave fabrics and patterns and artistic references (Gauguin, Klimt, Schiele, Frida Kahlo, Matisse, Leonora Carrington, Henri Rousseau, William Morris’ wallpapers) that both reveal and conceal the materials from which they are made of. It is as if she wanted to restore whatever dignity and beauty art may concede to a torn piece of paper and to the imaginative possibilities of it being patiently woven into a story, an image, a dream. Berrio, the constant gardener, is also the patient seamstress.
Her works display a secret alchemy that she discovers through the entwinement of the torn pieces: monkeys out of flowers and flowers out of birds, dresses out of leaves, and leaves out of dresses, monkeys out of night skies and nights skies out of monkey fur. If gardens draw attention to the particularities of their details, Berrio has created another garden, a transcendental space, in which materials, colors, textures, and bodies are connected in an ongoing flow that even alters the perspective: butterflies seem to make clothing as much as pieces of cloth cover the sky or the greenery of nature.

In this way torn flowers, butterflies, strawberries, fishes, angels, and all sorts of Japanese paper patterns, are delicately and fragilely contained within the contours of shapes of female figures and animals. These shapes seem to both hold together and be ripped by the pieces from which they are made of. Just like in dreams, the container becomes the contained, and the contained becomes the container, a blurring of limits that creates a sense of limitedness within the enclosed domain of the dream/work/garden.

In this sense, it is as if Berrio’s Gardens were a reinterpretation of the theme of the Hortus Conclusus (Enclosed Garden) portrayed in medieval paintings and tapestry. In the Song of Songs King Solomon sings to his bride:  “A garden enclosed is my sister, my spouse; a garden enclosed, a fountain sealed up”. The Enclosed Garden hence became a visual allegory of the union between Christ and the Church, and of Mary’s Immaculate Conception. In Berrio there is a pervasive feminine presence within her gardens.  But here the feminine is not a “garden enclosed”, a “fountain sealed-up”, nor an allegory of Immaculate Conception. On the contrary, the feminine becomes the figure of the oneiric logic of the limitless within the limited (garden) that weaves together disparate elements into an ongoing flow. Nothing is immaculate here. In Berrio’s gardens everything is touched and affected by everything else: pieces of paper, animals and humans, heaven and earth, reality and dreams, past and future, the autobiographical and the communal, Gauguin and Kahlo. This is the secret of the work’s fecundity and abundance, its capacity to give birth to a possible new world, and make us yearn it through a nostalgia of the future. The large format works that comprise the collection flesh out this counterintuitive feeling –nostalgia of the future- in an eloquent way: the intimacy of nostalgia, and the future’s monumentality. It is possible to think about these Dream Gardens as stained glass windows inside a Cathedral taken over by the jungle.
In one of Berrio’s works there are three women riding a horse. One woman motherly holds a baby elephant in her arms; another one, the protector, clenches a bow and a fish/arrow; and the third woman is weaving the tail (tale) of the horse they are riding and we are seeing —expelled from its paradise. This triplication is perhaps the key to the garden’s secret because it gives us a glimpse into the gardener’s powers: the work is a self-portrait of the artist in her three-fold identity as mother, protector, creator/story-teller. 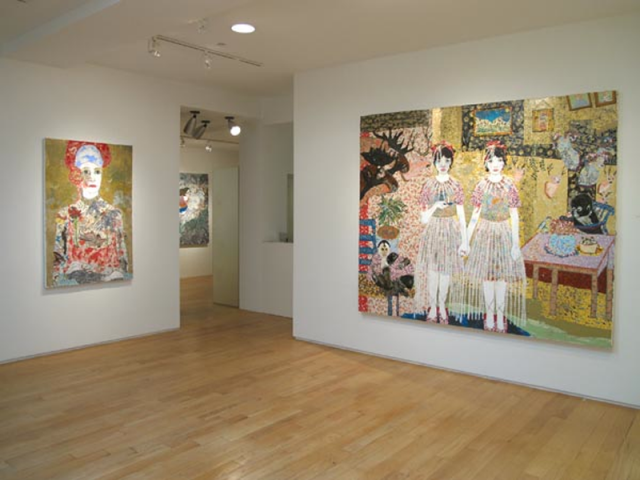 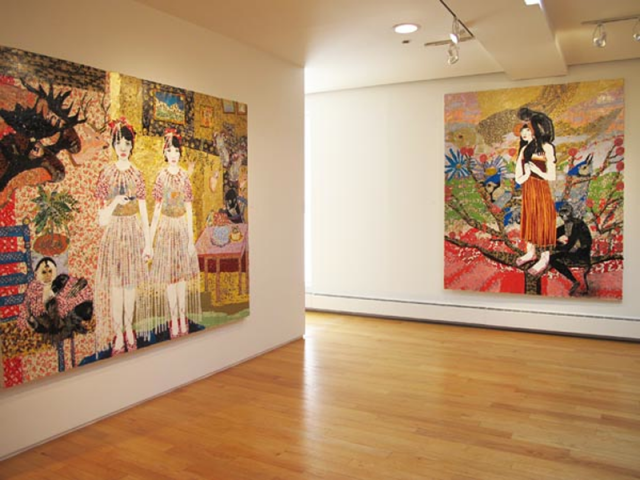 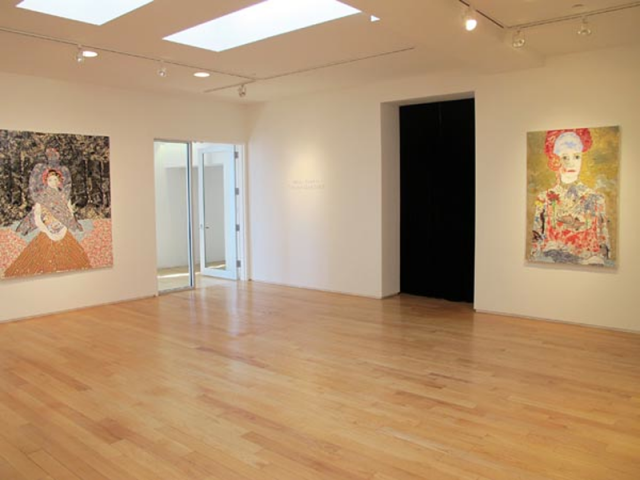 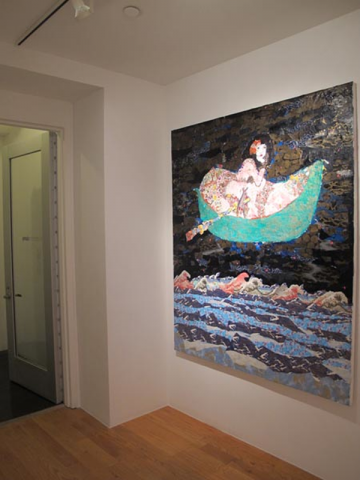