Instructions on How To Photograph a Landscape

Photography, according to Barthes, is by nature somewhat tautological. In a photograph, a pipe is always a pipe, a staircase a staircase, and a freeway interchange, fatally, a freeway interchange. Doomed to carry the burden of its referent, photography clings to what it shows like the window glass to the landscape. It freezes an instant that, anchored to a precise spot, has already been. But, in his attempts to raise anchors and to free himself of the medium’s “this is this”-ness, Jorge Miño has come upon another time and another space for the images’ coming to light: what he makes are photos after photos, laboratory specimens that release images from their obsession with the referent so that they can show something more than what the eye has seen. Or, rather, they are photographs that say less and, therefore, more than what the original image had said.

It’s not that Miño eschews the presence of things themselves; the staircases, ramps, freeway interchanges are right there. But his photographs duplicate and fold the image, solarize and color it in an unlikely palette. They alter the scale and add a tenuous gloss to the cotton paper until the real space is veiled, time brought to a standstill, and an abstract form wrenched from pure indexes. In the age of post-production and appropriationism, Miño preserves every trace of the aura of the place and the photographer: the original image is always one and it is his, guarantee of a certain fidelity to the snippet of the city he has seen and the instant he has recorded.

Hence, the effect of digital interventions is twofold and often paradoxical. In the series Entrecruces, the city is indisputably the vast city of the present (Buenos Aires? Mexico City? New York? Brasilia?), but it is also a contemporary version of a print by Piranesi or Escher. What Miño has done is subtract specific traces and added textures until he has abstracted a motif, the landscape—timeless antidote to the urban labyrinth of the megalopolis and the regulated tyranny of public spaces. Static like all photos, his entrecruces are an invitation to motion.

In “Instructions on How To Climb a Staircase,” Julio Cortázar describes with pataphysical humor the unsuspected complexity of that recurrent operation in urban life: “No one will have failed to observe that frequently the floor bends in such a way that one part rises at a right angle to the plane formed by the floor and then the following section arranges itself parallel to the flatness, so as to provide a step to a new perpendicular, a process which is repeated in a spiral or in a broken line to highly variable elevations.” Miño also asks us to render strange our vision of an act invisible because so daily. It comes as no surprise that he is fascinated by modernist architecture, with its rational elegance that affords effortless passage from one side to the other: up and down, north and south, east and west, as if the operation Cortázar describes flattened in a fantastic space. For rationalism, stairs divide and ramps join. With pictorial imagination, Miño has photographed the landscape before the staircases and ramps go up or down, join or divide. 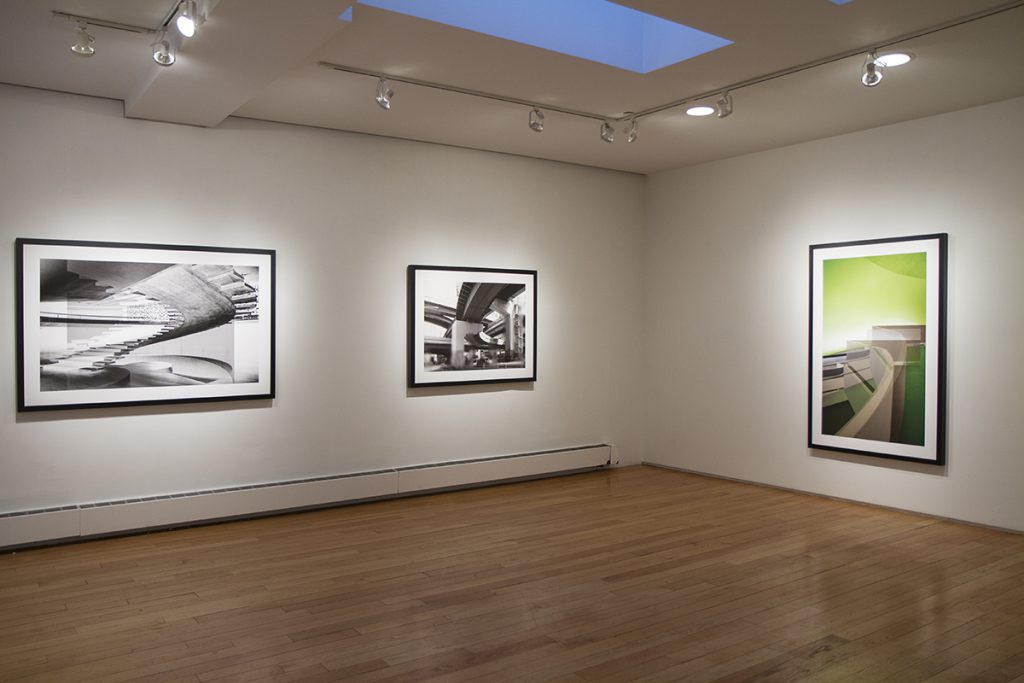 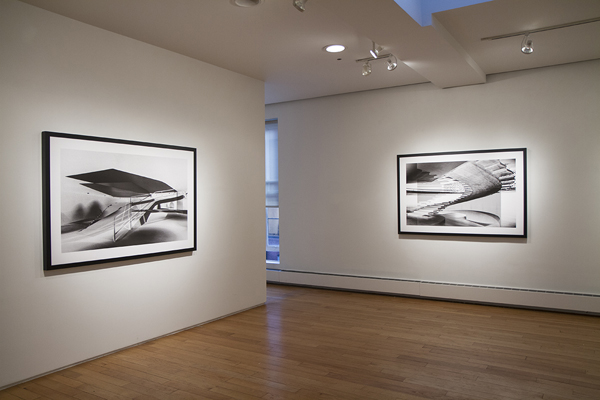 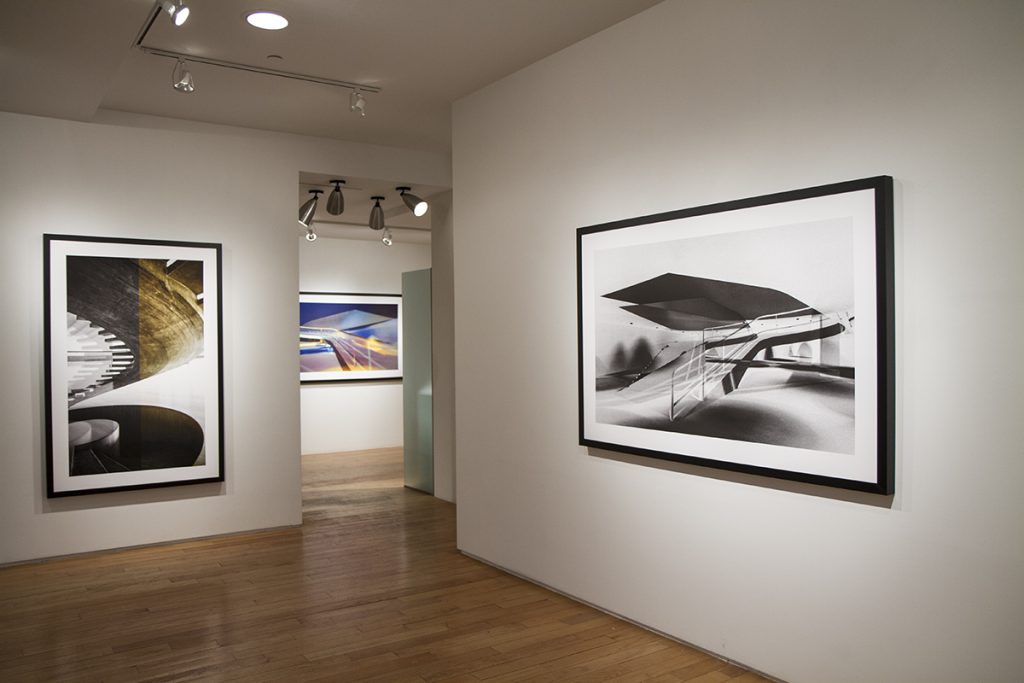 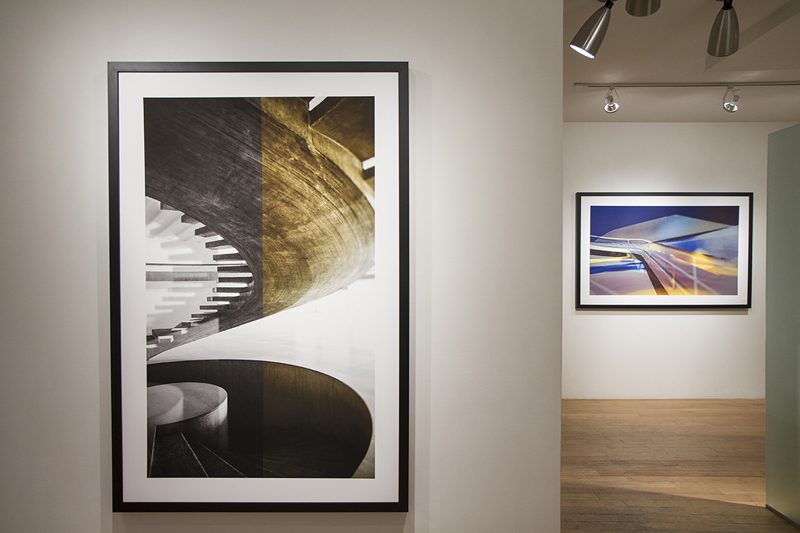 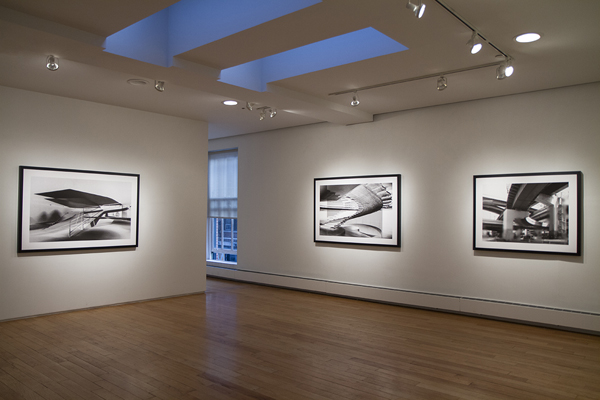 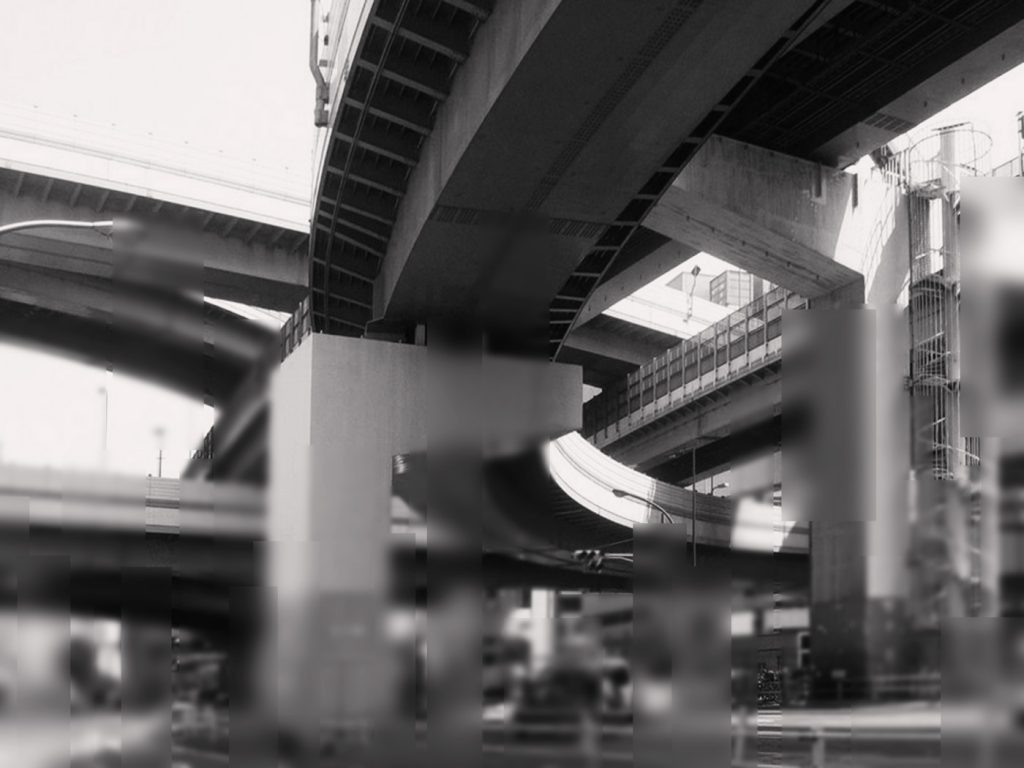 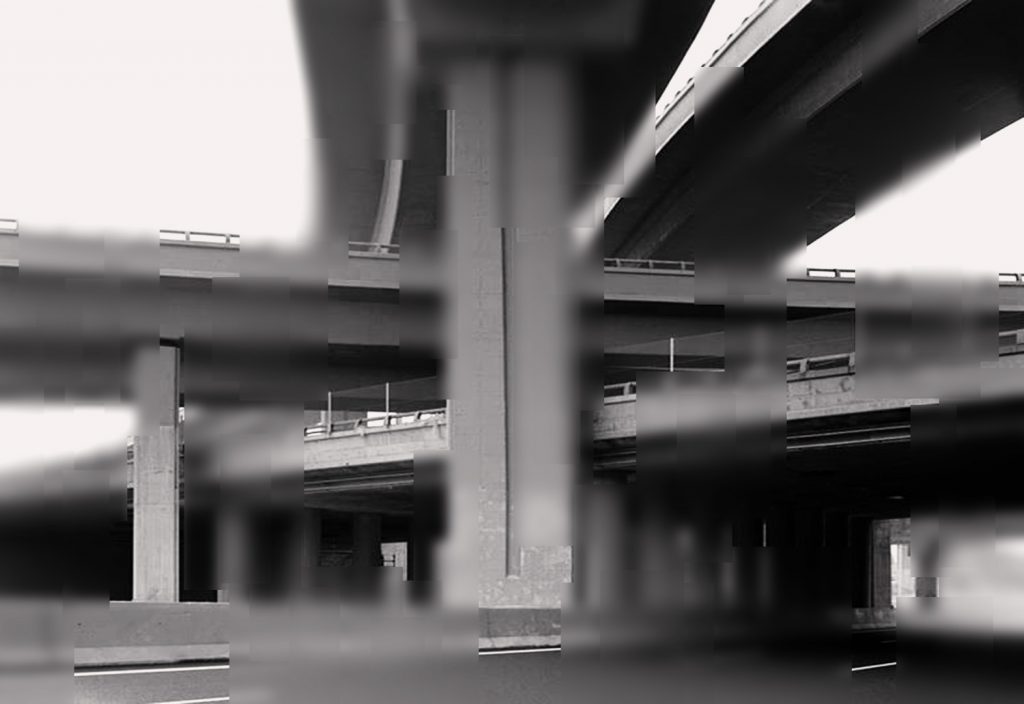 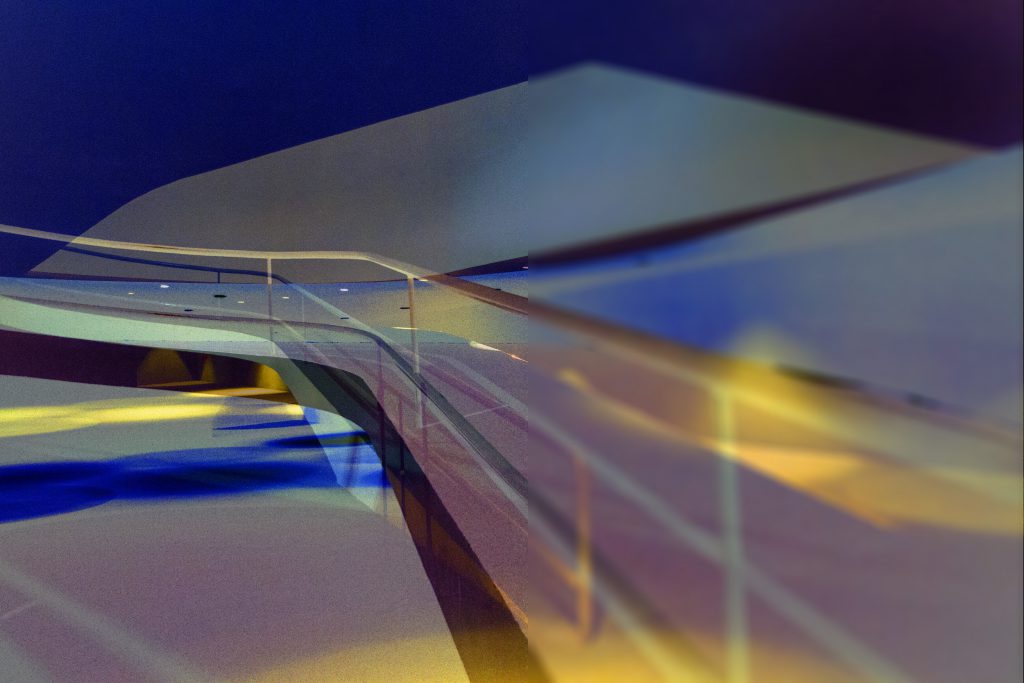 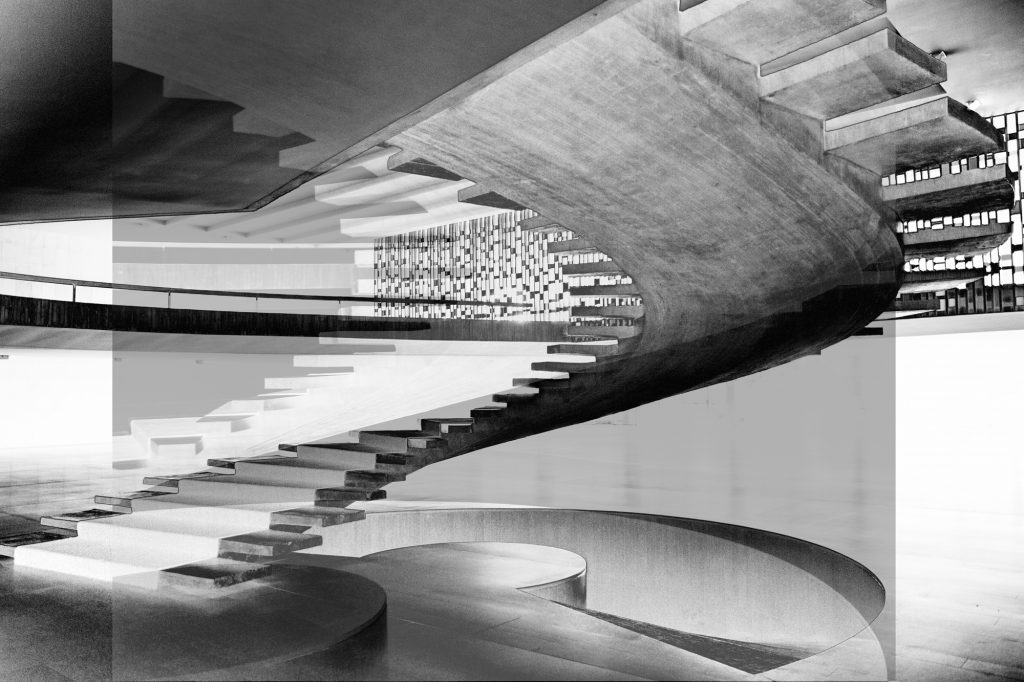 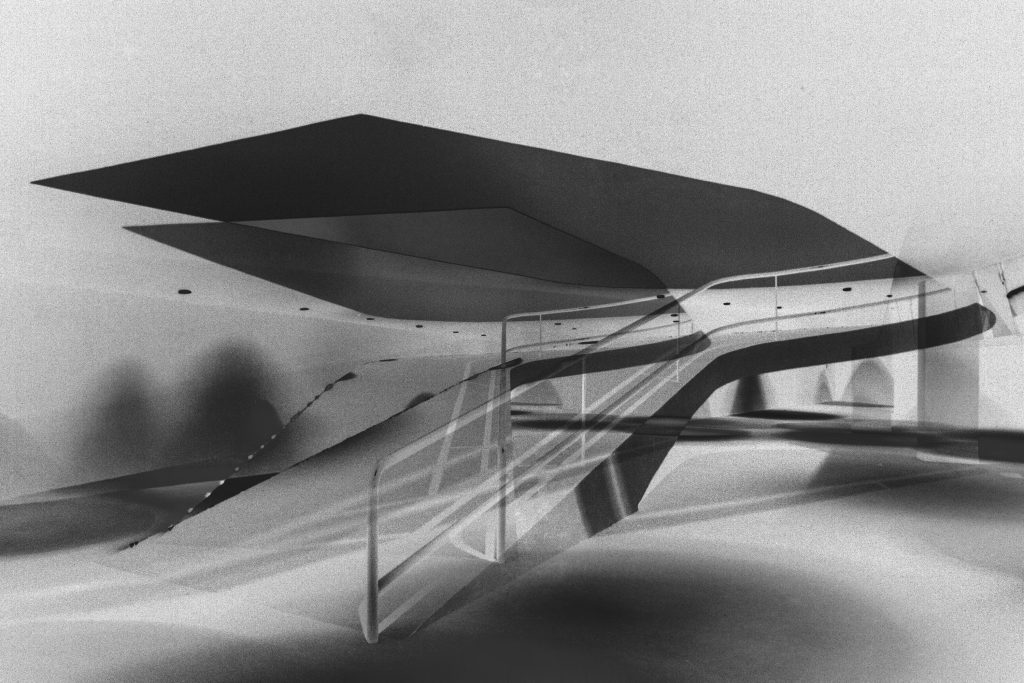 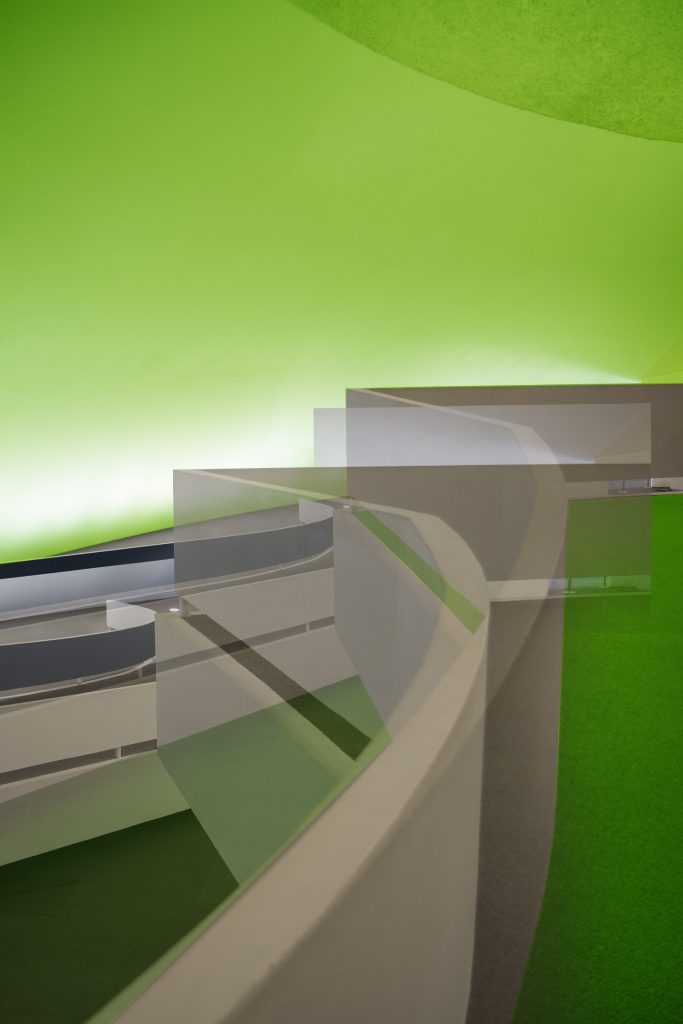