In his new series of paintings, Alexis Duque presents us with an idealized city. Baroque in spirit, the works abound with a plethora of distinctive buildings that are a blend of fantasy and reality. Among these, we see an inventory of iconic New York City buildings such as the Empire State, Chrysler, Flatiron, Woolworth, Condé Nast, Philip Johnson’s AT&T building (now SONY), Frank Gehry’s IAC building, and the Guggenheim. Each of these is rendered as a blend of realistic details with the artist’s own inventions. Throughout the works, the artist is principally concerned with two themes, the skyscraper viewed among the clouds and scenes of the well-known skyline at night. The first series seems inspired in part by Romanticism of the early nineteenth century and the breathtaking power of nature. In these paintings, the concrete sides of the attenuated buildings are visible among dense, lengthy puffs of clouds. The entire image springs forth from the cloud itself, as though it is a passing daydream, entirely imagined. The night series focuses on the windows of the city and glints of echoed light that become its illumination. In works such as City Lights and Blue Glimmer, the squares of color that line the buildings allude to the late works of Piet Mondrian, who was in turn inspired by urban sounds and their reflection in jazz music of the 1950s. These luminous structures—alight from within and surrounded by various shades of dusk—are truly magical. Throughout the mass of buildings, the artist has included a series of elevated highways or train rails, adding to their futuristic aura. To create his works, Duque took hundreds of photographs from various local areas including Brooklyn, New York, and Weehawken, New Jersey, which has a famous view of midtown Manhattan. Most inspirational in the photos were the forms of the building themselves, which the artist rendered lovingly, emphasizing the minute details of each majestic edifice. In Uptown, one of the earliest works in the series, we see the Chrysler and the Flatiron buildings in the company of other architectural wonders from upper Manhattan, adorned in some cases with resplendent vegetation. In paintings such as the aptly named Sky City and Metropolis, we see cranes and buildings that are nearly complete, adding to the sense that the future is constantly under construction. The artist directly considers the connection between the constructed world and the human organism, creating portrait busts revealed through the vertical, horizontal and curvilinear forms of the buildings. It is this hopeful aspect that permeates the works overall. Rather than the dystopic world seen in the 1927 film Metropolis, however, Duque’s buildings allude to a space where structures are idealized and transcendent beauty is worn on the exterior of each edifice. Rocío Aranda-Alvarado Ph.D, Curator, Museo del Barrio New York 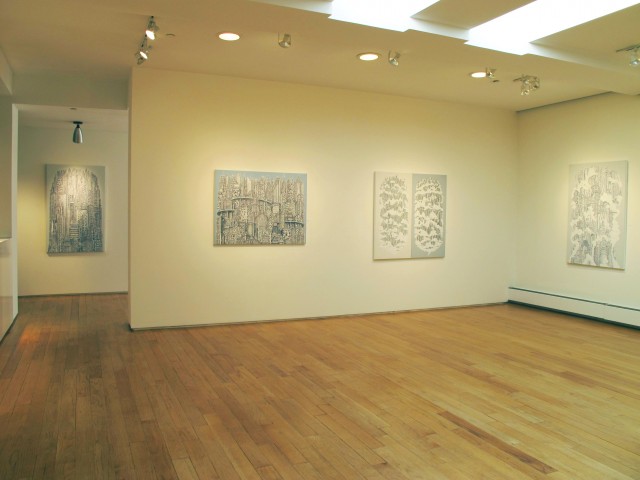