Omnipresence: A Performance by Brenda Perry-Herrera & sound collaboration by Kotorbay

The performance derives from Perry-Herrera’s fascination with attempting to imprint the ethereal and the impermanent.  During the performance, the artist will act as deus ex machina of the Anthropocene by painting branches inside the Gallery space with a cyanotype emulsion to transform their natural color for the duration of the exhibition. Oscillating between being and doing, Perry-Herrera will intercept her repetitive painting action with the stillness of sound meditation. The artist’s garment will also metamorphosize throughout the day as it manifests the all-pervasive energy of light, the self and nature.

Brenda Perry-Herrera (b. Juarez, Mexico, 1978) is an artist who emigrated from Mexico at the age of three and grew up in the U.S.-Mexican border region of west Texas. Her work often explores themes of social and ecological relevance. In multiple projects, the artist has undertaken the roles of researcher, airplane pilot, programmer, scientist, educator, and mother. Perry-Herrera holds a Bachelor of Art degree from Columbia College, a Master of Art degree in Art Education from University of Texas El Paso, and a Master of Fine Art from School of Visual Arts. She has exhibited nationally and internationally at institutions such as BRIC, McKinney Avenue Contemporary, New York 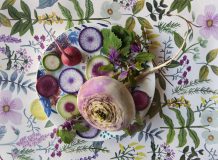