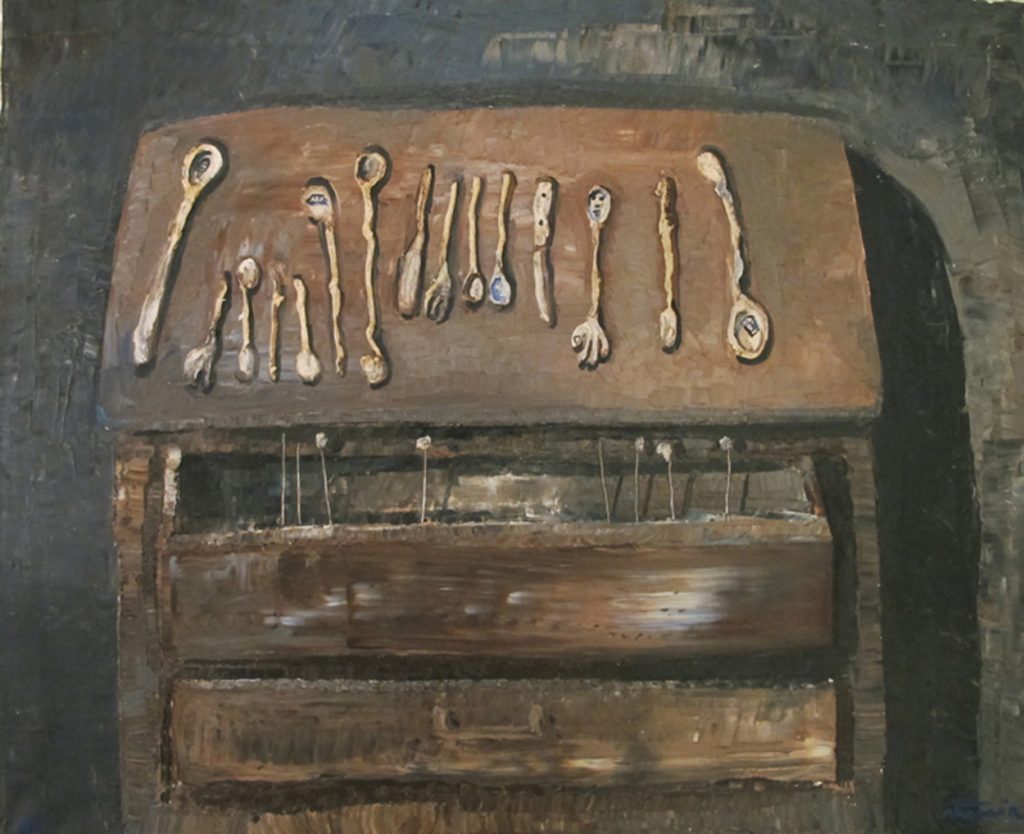 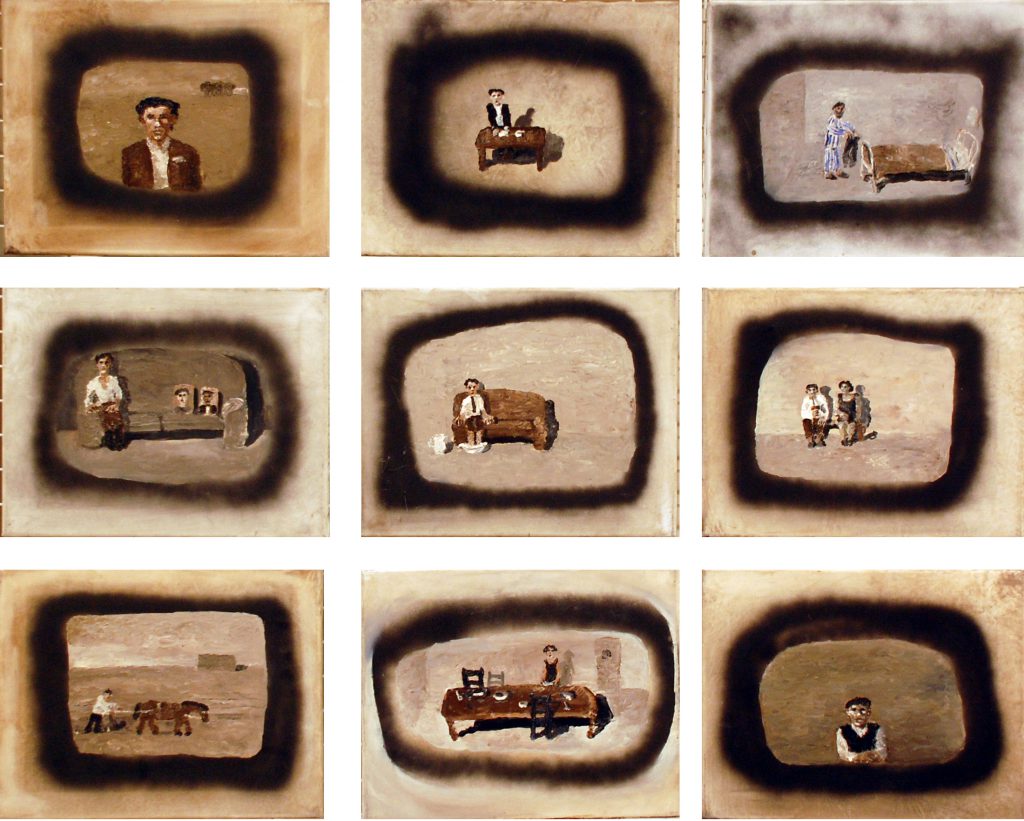 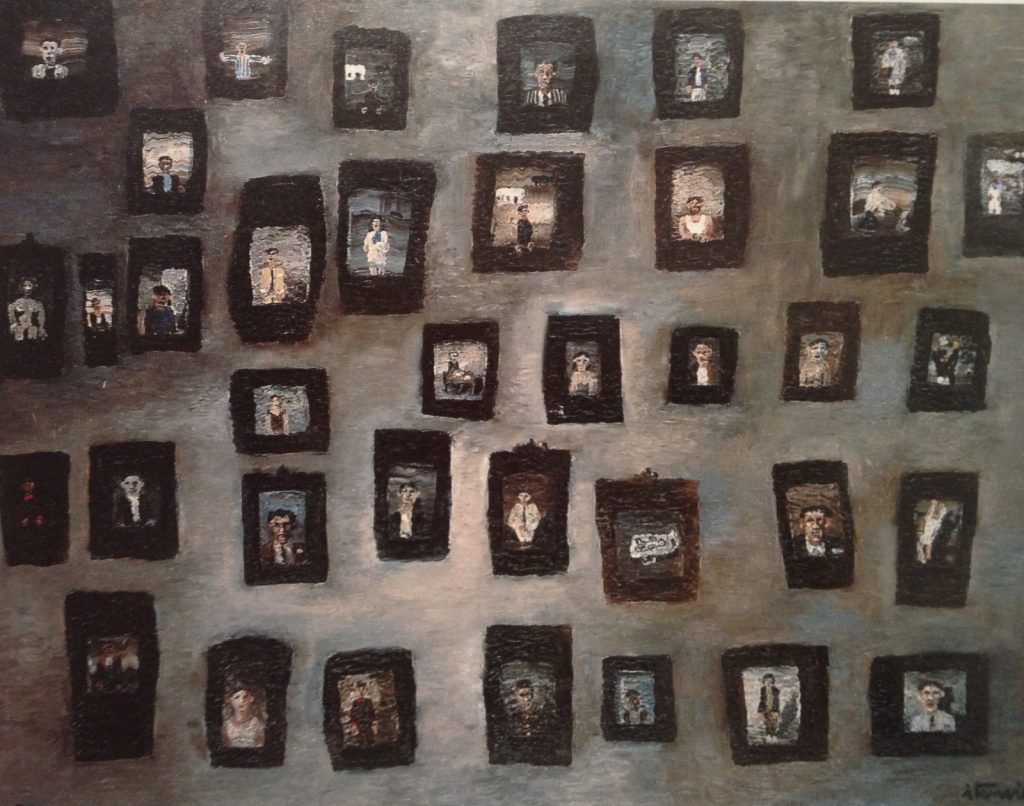 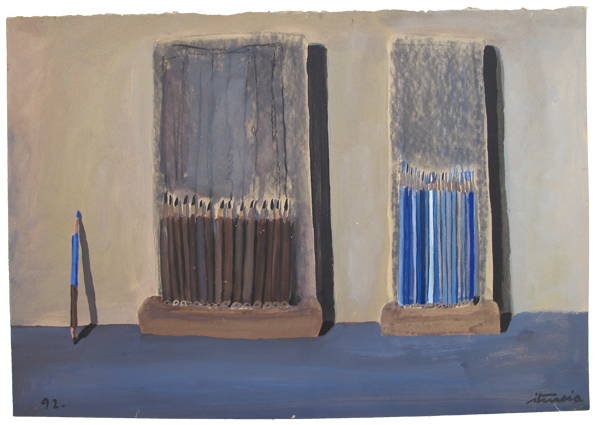 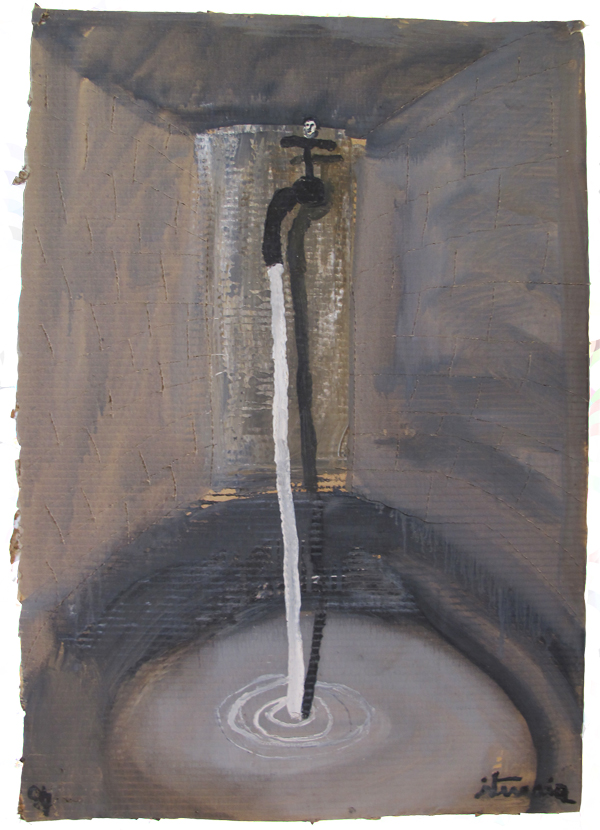 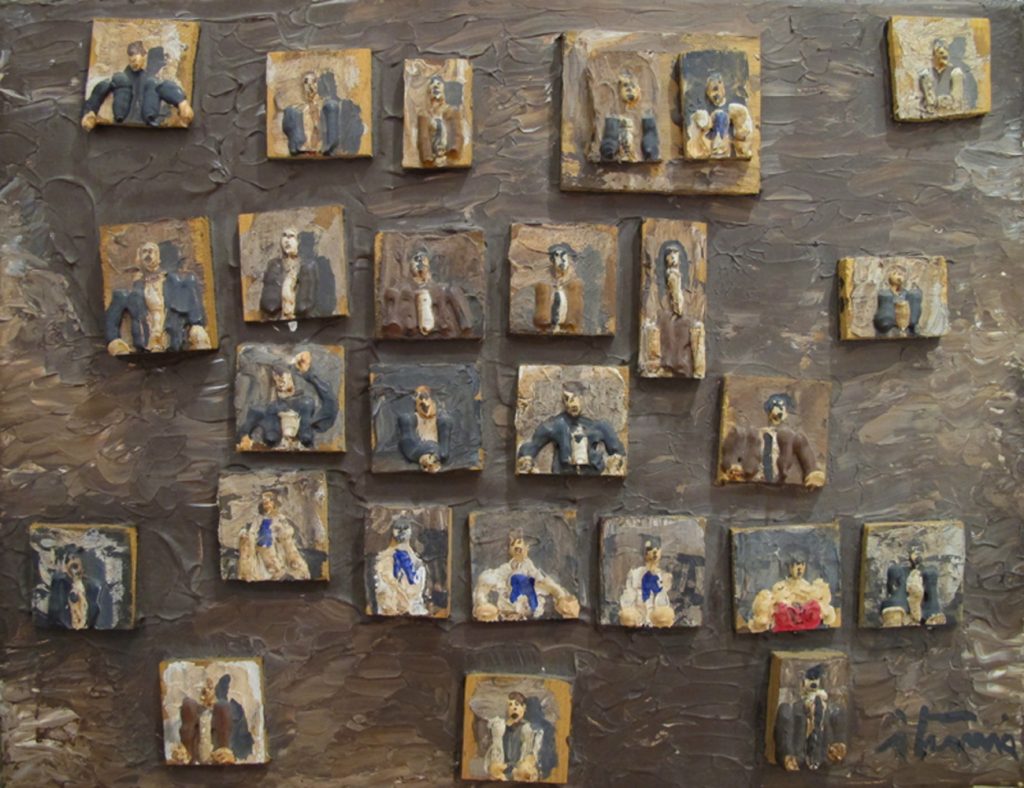 oil on wood and canvas 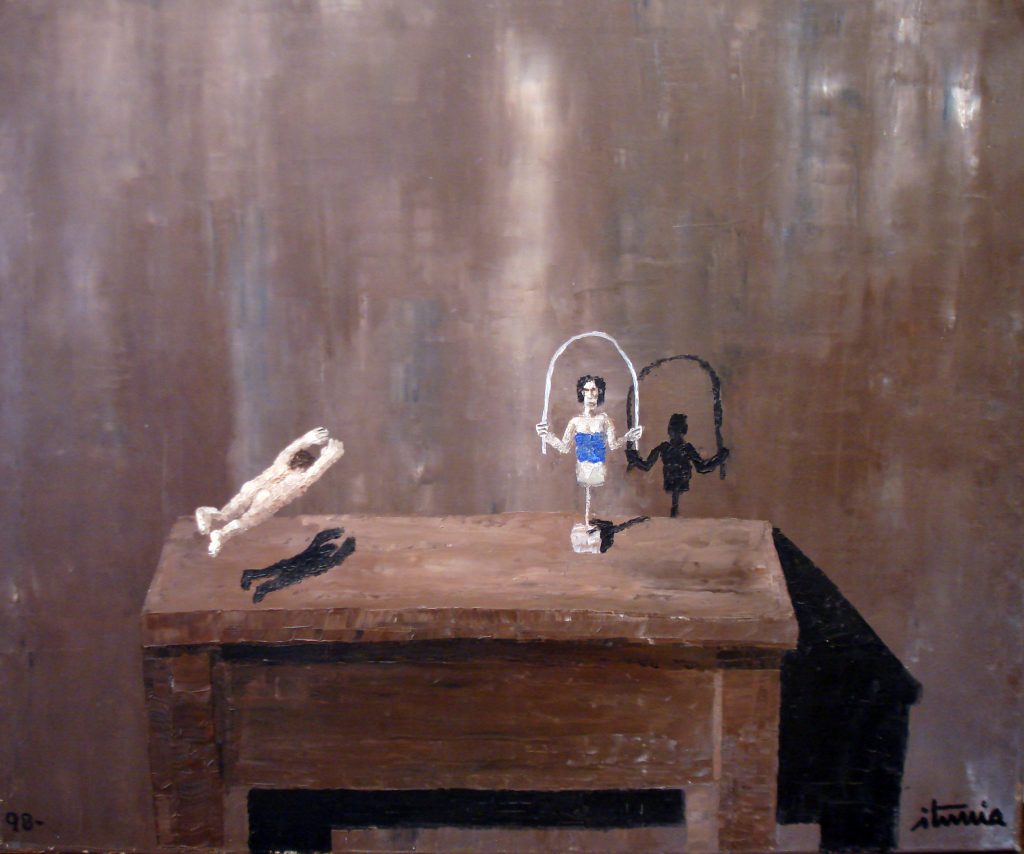 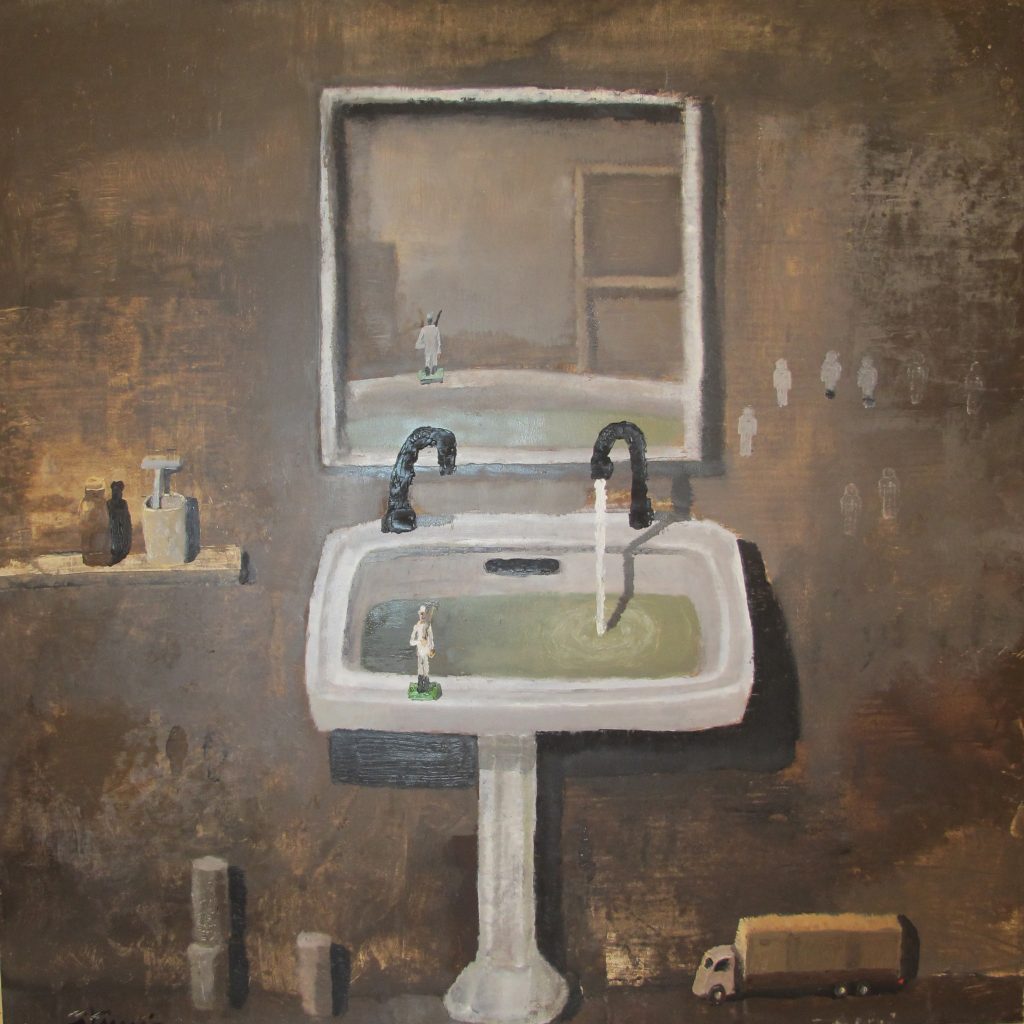 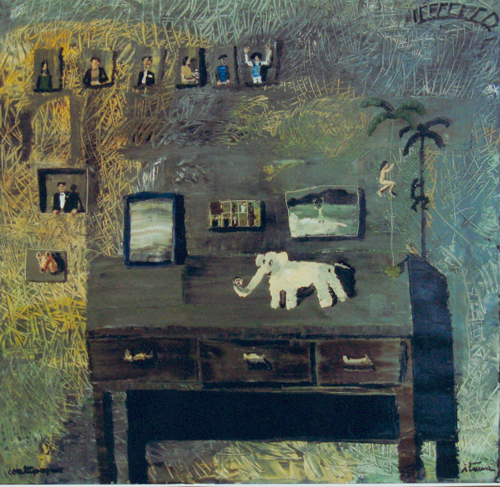 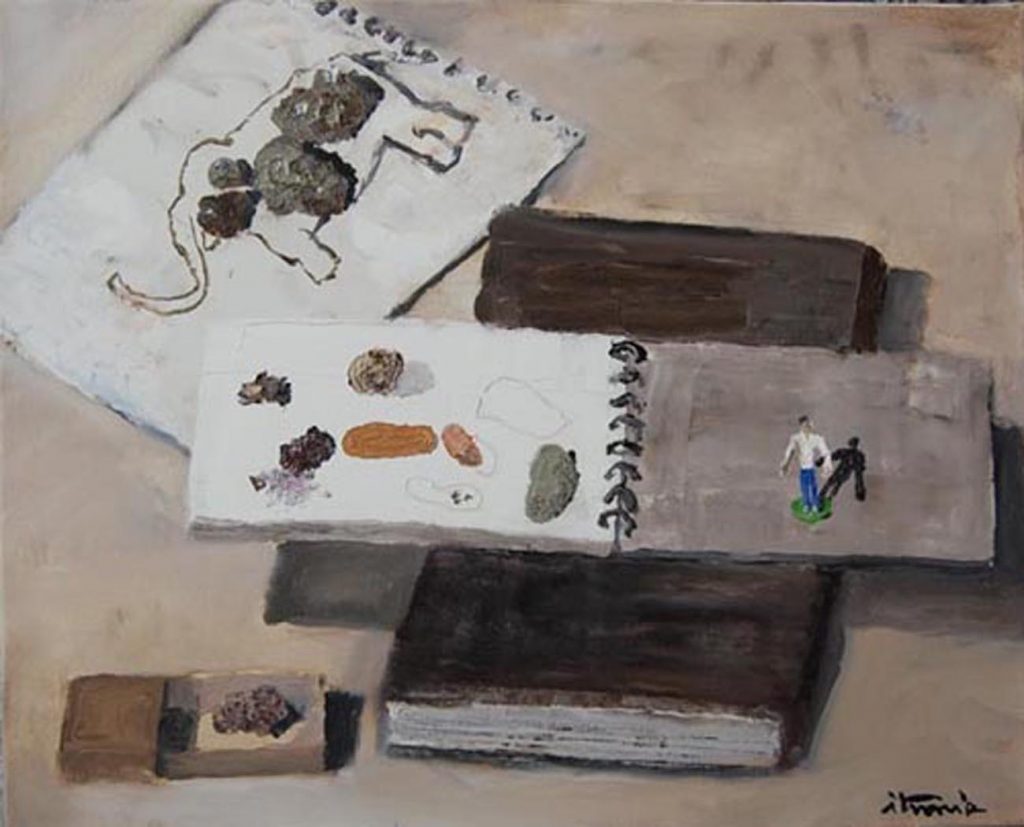 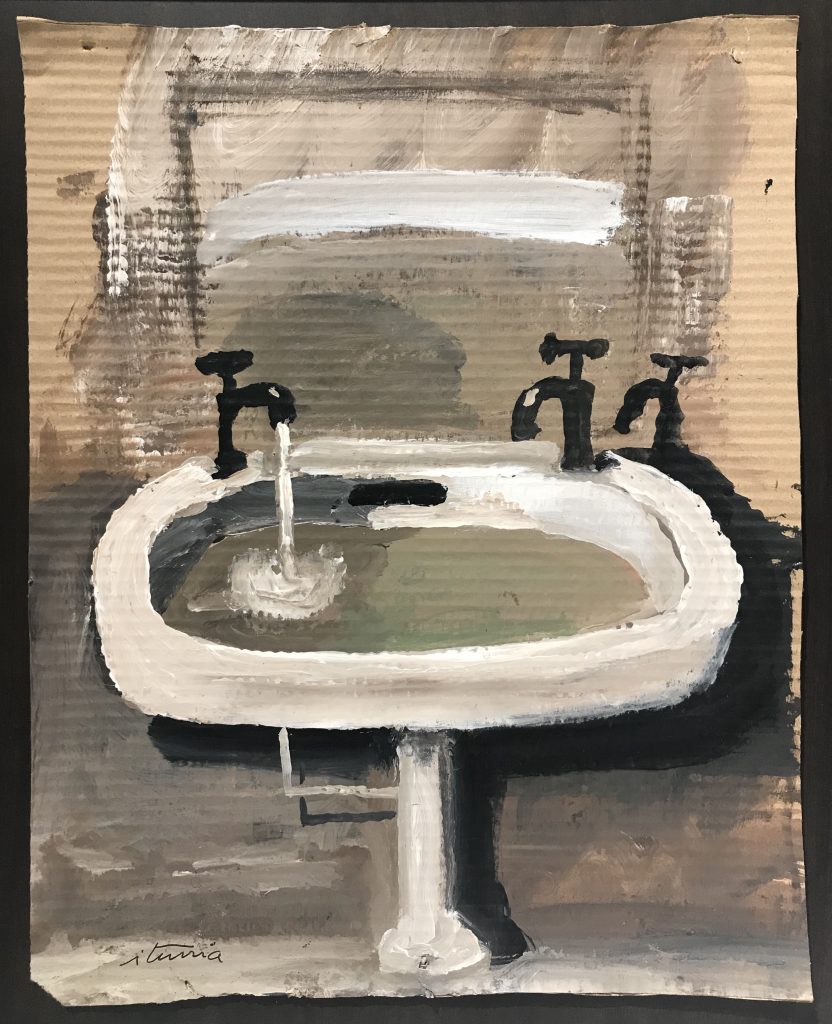 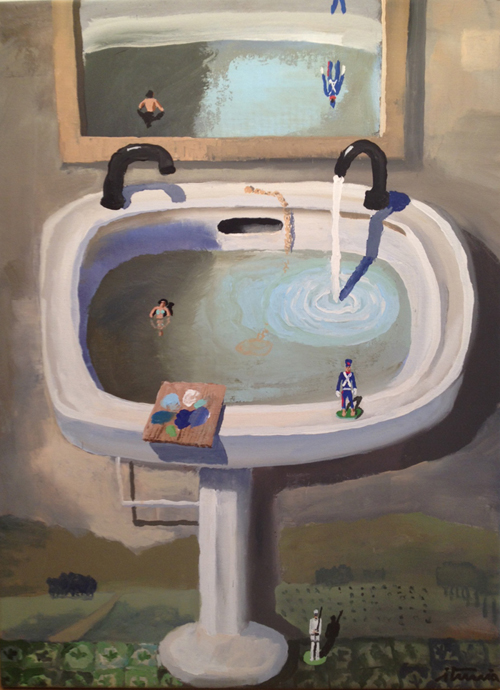 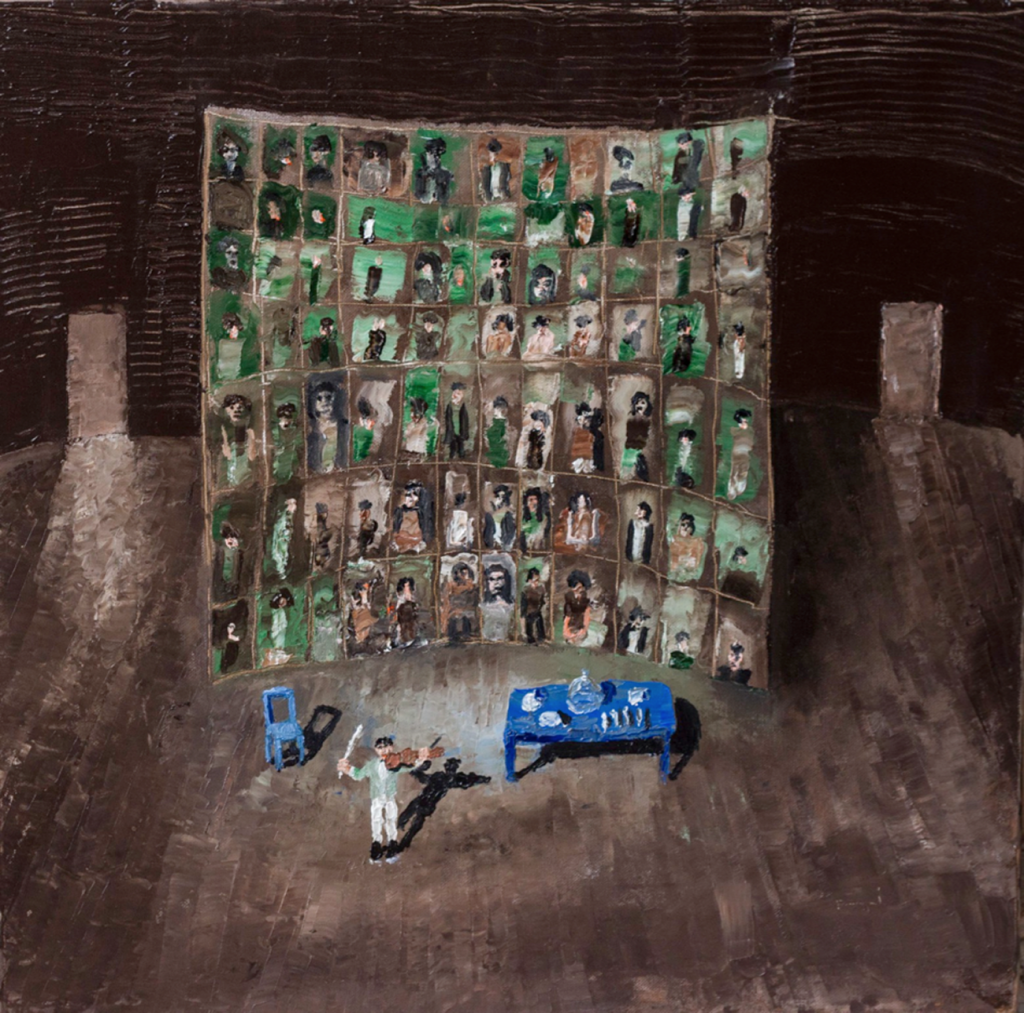 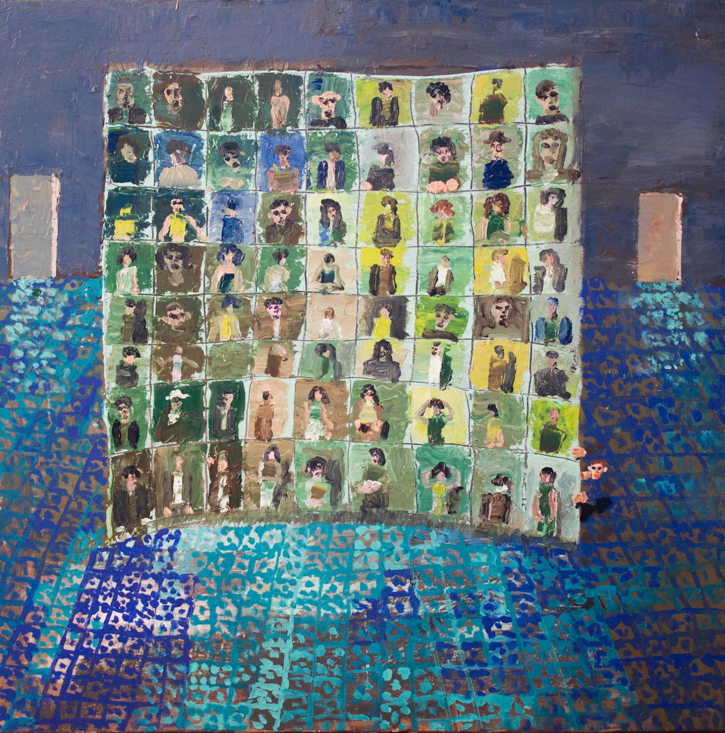 “In terms of Uruguayan art, Ignacio Iturria achieves what Pedro Figari achieved previously: to develop the creative act into a solid identity without neglecting common essentialities, at least as defined by Western parameters for a majority of the human race. This double functionality is indispensable. Were it not dressed in the lovely clothing which a state of restorative nostalgia can offer us or the consecration of the everyday, these essences would be shipwrecked in rhetorical asepsis. That costume is not just ornamental. Within that area which is so distinctly Latin America, so inevitably Latin American, constituted by the flow back and forth between the capital cities of the River Plate, there is a recognizable physiognomy; within the more introspective, cautious region of Montevideo, it is almost the fingerprint providing its identity. In the analysis of the causalities that stimulate Iturria’s diffusion, I have preferred to leave a considerable space for the wise texture of the inexplicable. On considering artistic creativity, and its phenomenons and epiphenomenons, it is convenient to come to a stop in time, before unravelling the magic, dissecting the mystery. Because there is so much magic, so much mystery behind Iturria’s growing relevance, just as there is in the work itself” .
– Alfredo Torres, Remembrance As Distance (Lima, Peru: Lima Plaza Mayor da la Cultura Iberoamericana), 1998, np.

My first encounter with the work of the enigmatic and prolific painter, Iturria, was in 1996 at Plug In Gallery, the artist-run centre in Winnipeg, Canada. I had previously heard of his textured or “sculpted paintings” from the American curator Laurel Reuter. Iturria’s quirky figurative-abstract style and humanist subject matter identify him as a Latin American painter. The tragicomic conceptual landscape that informs Iturria’s magical and nostalgic canvasses is intimately linked with a region in the foothills of the Peruvian Andes.  Brown, black and sepia colored paint squeezed directly onto a variety of surfaces, from stretched canvas to corrugated cardboard, give Iturria’s abstracted ‘every man’ figures material mass while details in white are dramatically sculpted with a brush or spatula. The resulting three-dimensional paintings are surreal portraits of intense absurdity.   Iturria imbues his Neolithic stick figures with a deliberate simplicity that lurches towards kitsch as it engages social commentary through the perverse form of cartoon sequences.

Iturria’s world-view presents humanity as a house of many characters. Employing both kitsch impulse and artist’s moral rudder, Iturria’s paintings invariably reveal through their conceptual patterning a human iconography of the Americas.  Quotidian rituals of everyday performance and domestic space are examined in painting after painting to weave a universal view of the human condition.  Lilliputian figures inhabit segregated sparsely furnished rooms, illuminated by dangling bare light bulbs — a simple table and chair or single bed in the foreground, it’s occupant(s) either frozen in limbo, busy with daily tasks or in the thrall of an embrace. Iturria’s innocuous apartments are human containers with expansive windows, portals to the larger world of shared human experience, symbolic of the psychic, surreal turmoil endemic to urban dwelling.

As depicted through Iturria’s microscope, dwelling space is at once a shared monument to the banal modernity of contemporary living and the private hell of solitary compartments in the mental health ward ( “Stanno tutti bene”, 2nd version). Iturria’s stick figures inhabit basic urban high-rise shelters, the brutal Modernist concrete architecture common to the Americas. They form something of a genealogical tree, acting as a reminder of population and social security concerns evident world-wide in the intense proliferation of jails and elimination of long-term mental health facilities.  The theme of the “contained human” is one that Iturria returns to over and over. He often renders the human figure pictographically, stripped to its bare essentials, just as he strips living spaces to their essential form like cell blocks or theatre sets with a distant window or skylight or occasional barren doorway in the background. The dramatic skylight and doorway in “Apuntalar I” or “Rosario Oriental” seems just out of reach although invariably it is a dramatic relief to recognize an unexpected exit.

As bleak as Iturria’s chosen settings seem to be, his wiry figures often dwell in a zany world of children’s play composed from personal childhood memories. The paintings as myriad portraits from the artist’s imagination continue to cement his strong familial bonds. He readily discusses the influence of his cultured father, an immigrant from Basque Spain whose goal was to be an artist in his adopted Uruguay, and Iturria’s mother who encouraged him to become the artist his father failed to become. Iturria paints to “honor his father’s ethics, compassion and humor.” Iturria’s parents encouraged his artistic inclinations to draw and paint, to see and experience the world with an understanding of the epistemology of the Uruguayan land. His most vivid memories are of a Montevideo childhood playing with small toys on the make-shift faux ‘urban landscapes’ of household furniture in his parents’ home. The expansive Uruguayan landscape and Rio de la Plata River are a universe parallel to his miniature living-room playground that Iturria likens to the remoteness of living on an island. The island life of Montevideo in the turbulent political realm of the 1960s and 70s became Iturria’s eternity, the artist’s place in this eternity with suburbs and a river became more absolute with faith.   In his studio the miniature world he paints is in constant psychological birth through associative mechanisms of recollection. Invigorating both the real and imaginary landscape, Iturria recalls in his paintings the vast surface of a family sofa that becomes an elephantine hulking mass foregrounding a plethora of active and passive painted figures.  Through this regenerative process of animation Iturria has not only expelled his parents from the canvas but reality as well — not necessarily the outer world, but the penetrating “ways of the world” — reality at its deepest level is abstracted and repopulated with the artist’s own.   From Iturria’s august solitude as an adult, the field of vision for his “inner child” is without limit and the portrait of its inhabitants as innumerable as memory permits.

Iturria adopts the grid format reminiscent of abstract art of the 1950s and 60s as an expression of conventional ideas that become a form of languaging. The grids of portraits connected with basic lines of wire are provoking in their display of unity in diversity, while also embodying a bleakness carved by memory that suggests a fear of death, a fear of extinction of earthly body and memory alike. Among the portraits, a recurring schematic elephant takes on monumental proportions and significance. The portrait of human solitude (interchangeable with elephantine solitude and memory) is a way of giving form to modern civilization’s spiritual values largely presented outside the traditional gallery, that of the religious cathedral. Iturria offers glimpses of the religious edifice in Christ’s absence and graffiti stamped replacement: that of Goofy, the Disney character. The cathedral’s high realist portraits of the ecstatic human subject in the thrall of the spirit of the Holy Ghost are notably absent. The cathedral having been replaced by the high-rise condominium, a commercial cathedral whose sales showrooms depict the new ecstasy of ownership in a fabulous place on earth, rather than in heaven. 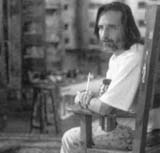 Ignacio Iturria was born in Montevideo, Uruguay in 1949. He studied art and graphic design before turning painting and fine art into a full-time activity.

In his early years he spent some time in Spain, but inevitably returned to his homeland. Since then, the artist has developed his mature style, with its strong, personal vocabulary of earthy colors and dreamy-whimsical, memory provoking, history-laden characters who have become the hallmarks of his deeply poetic and humanistic art.

Iturria has exhibited throughout Latin America, in the United States and Canada, and in Europe and Japan. In 1995, he won a major prize at the XLVI Venice Biennial. Iturria’s work has been featured in solo exhibitions at the Sixth Havana Biennial; The Museum of Modern Art in Bogota, Colombia; the Museum of the Americas in san Juan, Puerto Rico; Plug-In, an arts center in Winnipeg, Canada, the North Dakota Museum of Art and in 1998 a major solo exhibition of his works took place at the Museum of Fine Arts in Buenos Aires. This show then traveled to the Rufino Tamayo Museum in Mexico City and Museum of Monterrey in Mexico. The artist currently lives and maintains a studio in a suburb of Montevideo.

Shows at La Galeria, Quito, Ecuador.
Shows at the Uruguayan U.S. Cultural Institute (together with Clever Lara and Nelson Ramos).

Takes part in the project “Belongings”, “ways to think / create”, where from His point of view, deals with the Judaism ́s and Christianity ́s iconography. Curated by Alicia Haber, in Engelman Ost ́s Gallery
”13 by 13”, thirteen curators and thirteen artists, curated by Manuel Neves in Spain Cultural Centre

2010-Museum of Contemporary Art, Youngeun
Oriol Gallery, Barcelona, España.
Takes part in the exhibition of Art and Sports in the Ministry of Education

and Culture of Uruguay, due to the World Soccer Championship Collection Display at Mercedes, curated by Prof. Alicia Haber Exhibition at the Oriol Gallery, Barcelona, Spain